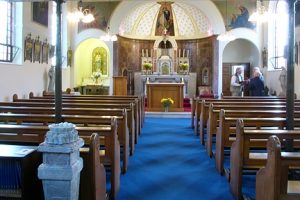 The small Church Bell used to be installed in the Old Town Hall in Preston but has been at St Mary’s since about 1860.  However, it had not been rung for a long time – because the stone support mounting was unstable.  Again this was a good time to sort it out – we now have the bell rung ‘electronically’ each Sunday morning calling Parishioners to Mass and the Angelus is rung at noon each day of the week.

The Sacristy and Presbytery were also in a poor state of repair and a significant part  has been knocked down and rebuilt.  All this work took about 6 months to complete at a cost of nearly £300,000.

Having retired from being Parish Priest of St Mary of the Angel at Bolton le Sands, Father Joe Diskin came to live at St Mary’s and quickly established himself as a popular member of the Parish community but, sadly, this is no longer the case so there is now no resident priest.

In 1968 Father James Keville became Parish Priest at St Mary’s and held the post until his death in November 2005.  He has by far and away been the longest serving of the 24 Parish Priests and a huge figure in the small community of Lea Town.

Fr Keville was born in 1920 and brought up on a farm in Headford, County Galway in Ireland.  He came from a strong Catholic family of 8 children and was ordained a Priest in June 1946. Later that year he came to Preston to start his ministry.

To say the very least Fr Keville was from the ‘old school’ of Priests – resisting what he saw as unnecessary changes like shaking hands for the Sign of Peace – “this is a farming community, you don’t know what they’ve been doing prior to coming to church,” and believing it was a big part of his pastoral role to visit and take Holy Communion to the sick and housebound.  Even when the parish received a very large bequest and were no longer one of the poor parishes of the Diocese he still insisted there were two collections at Mass!

He had a very strong love for his parishioners, particularly the old and the young.  His pride and joy was the Primary School situated just opposite the Church.  In 1978  he took on the Diocese, the County Council and the Government to keep the small village school open when it was going to be closed for an arbitrary lack of numbers on  role (less than 30).  The closure decision was reversed and it now has close to one hundred pupils and is a very modern and well liked ‘country jewel’ of a school.

Fr Keville remained at  St Mary’s until he died almost 38 years later – by far the longest serving Parish Priest, he is buried in St Mary’s Cemetery.  There is a marble plaque, in memory of him, at the back of the Church – above the font

St Mary’s is a jewel, approached along a drive lined with twenty mature lime trees it nestles in its own grounds.  Recently a Mulberry tree, one of only two known in Preston, was discovered in the grounds; another claim for fame for a parish that has traditionally hidden its light under a bushel.