Congratulations to Canon Adrian who was invested into the Equestrian Order of the Holy Sepulchre of Jerusalem as an Ecclesiastic Knight at a ceremony at St Chad’s Cathedral in Birmingham this weekend.

At the heart of the Order is an individual commitment to personal spiritual development with the collective endeavour supporting the Church and Christian people across the Latin Patriarchate of Jerusalem.

The historical development of the Order is, and now must remain, somewhat obscure. Following the First Crusade, a tradition (approved by Popes) of ceremonially appointing Knights at the Holy Sepulchre developed. However, there was not, through those year, a single organised Order under the protection of the Holy See in the sense it exists today.

The modern Order has been closely aligned with the Latin Patriarchate of Jerusalem, itself re-established in 1847.

Admission to the Order is, of itself an honour, but not an honorific. Investiture marks the start of service, rendered in a particular and special way, to a troubled land, where our prayer and tangible support remains vital.

For more information on the order please visit www.eohsj.org.uk

Canon Adrian and Michael were invested into the Order at St Chad’s Cathedral in Birmingham.

The service was conducted by Archbishop John Wilson KC*HS, The Grand Prior of the Lieutenancy of England & Wales. 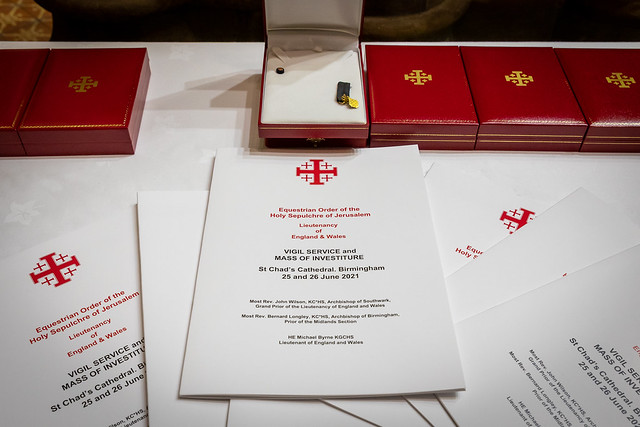 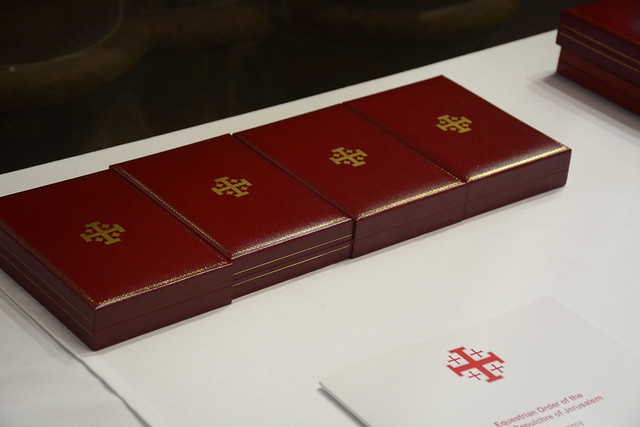